Code on the beach is organized by a 100% volunteer driven non-profit organization, and have as a goal to be as affordable as possible. This made it an attractive option compared to closer conferences in Europe, or bigger conferences in the US, even with added travel cost and lodging. And none of those have "beach" in their name.

Don't expect them to throw free food, drinks, and gadgets at you around the clock though. It's not a promotion stunt from Microsoft (even though you get a sticker). The sponsors got us breakfast and lunch, and some mandatory give aways (a selfiestick!). Don't worry, you will get a t-shirt.

Most of the attendants seemed to be from Florida, and we may have been the only ones from outside the US (at least we did not meet anyone else). The main sponsor Availity had brought many of their devlopers from other parts of the US.

All the sessions of the conference were recorded, and will be available on Youtube.

2. The sessions we attended

The session covered how to use free services to act as a simple lab for synthetic performance testing and how to get Real User Metrics (RUM) from the very last mile via the instrumentation API's built into browsers.

COB couldn't have started better. Nik Molnar (co-founder of Glimpse) acted as a Hanselman light - from notepad typing jokes before the sessions started, to a bonanza of one-liners. Never boring, in contact with the audience and with an energetic and charismatic character. The presentation was spot on, with hidden gems that left the audience in ave. An interesting metric called the Speed Index was introduced, and how to use the free service Webpagetest to get performance metrics for your site. The speed index measures how quickly the page contents are visually populated, and this should ideally be under 1000 ms.

We think that speed is important, obviously, but should we just look at the speed index? To get a good Speed index score, loading the page asynchronously is essential. The problem with that is that the loading can be perceived as confusing, when some parts of the page appears and then moves to another part. Nik didn't discuss this part much, but we think that the way the page is loaded should be a factor.

The presentation and demo code is available at github.
For more: Nik Molnar's Pluralsight course on the topic.

Verdict: Highly recommended. Nik was the best speaker at the conference. 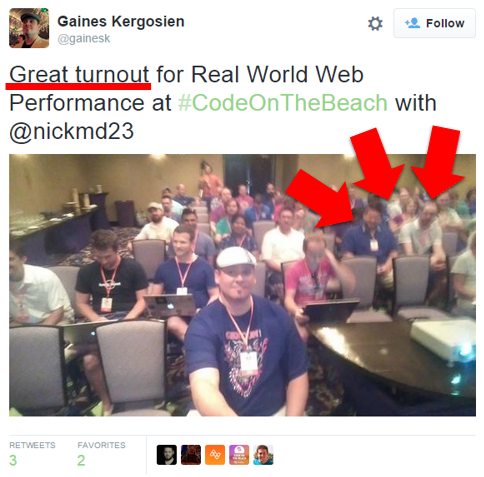 Raymond McDermott aka. Developer Jesus had a good technical session about React and Flux. Developer Jesus wasn't on the same energetic level as Nik Molar, but the talk was solid. A cool demo with a classic TODO-app showed the power of the tech.

This session from the Beyond code track included a step by step explanation and demonstration of everything needed to get your solution connected to application insights, and building a load test with Visual Studio Online. James included plenty of demos, but was a bit unlucky with having connection troubles as well as some recent changes in application insights that introduced bugs. He recovered well though, having prepared test results in advance.

Verdict: Maybe. Interesting toolbox for load testing, but the session suffers from the technical issues.

This session was supposed to be an introduction into the world of online payments and how to make it fun and enjoyable for the customer, with Justin Woo (technical evangelist at PayPal). The talk focused on the interfaces when making online payments, and how to make them smooth and intuitive, with minimal interaction from the user. The message of the session reminded us of Luke Wroblewski's key note @ NDC OSLO 2015. But, we had expected more than a couple of smooth interfaces from this talk, like some integrations and technial challenges.

Verdict: Not interesting unless you're making a payment GUI.

A non-technical talk featuring Al Letson, unknown to us, but a well-known radio host for the show "State of the re:Union", which was taken off air earlier this year. Letson was a lively and exiting speaker, showing us stories from the radio show, which were kinda tear invoking "American people doing the right thing" stories. We guess the main message of the talk was to never give up, and try to look at problems from different angles.

Also, Letson provided a fairly objective and realistic view of America, which was really interesting for us non-Americans. Without getting political or giving Letson unwanted meaning, our thoughts drifted to the epic opening of the TV series The Newsroom.

Stacey Mulcahy is a technical evangelist for Microsoft, and a bomb of energy. This talk focused on the importance of play, and having fun. Stacey went through some of her hilarious side-projects, just interrupted by equally hilarious animated cat gifs. It's impossible to recapture what went on during this talk, but it included tears, joy and booty high-five using Raspberry pie!

We are promised an introduction to the GO language and ecosystem, and this is exactly what we get. James keeps a steady pace, and is easy to follow throughout the session. It's plenty of live coding and demos.

Maybe using Windows and a familiar editor (VS Code?) would make the presentation better suited for .NET Developers, after all, most of us don't code on OS X.

Verdict: Recommended as a GO introduction for all developers.

Nik Molnar goes through plenty of useful features for any developers, devops, or ops using Azure web apps. Some was known to us, some was not, and every single one of those neat tricks was worth coming to the session. Small thing such as attaching a web app to IIS manger, all things SCM, and the smooth setup with triggers using zapier.com to get an SMS on deploy. Once again Nik gave an entertaining and useful presentation. 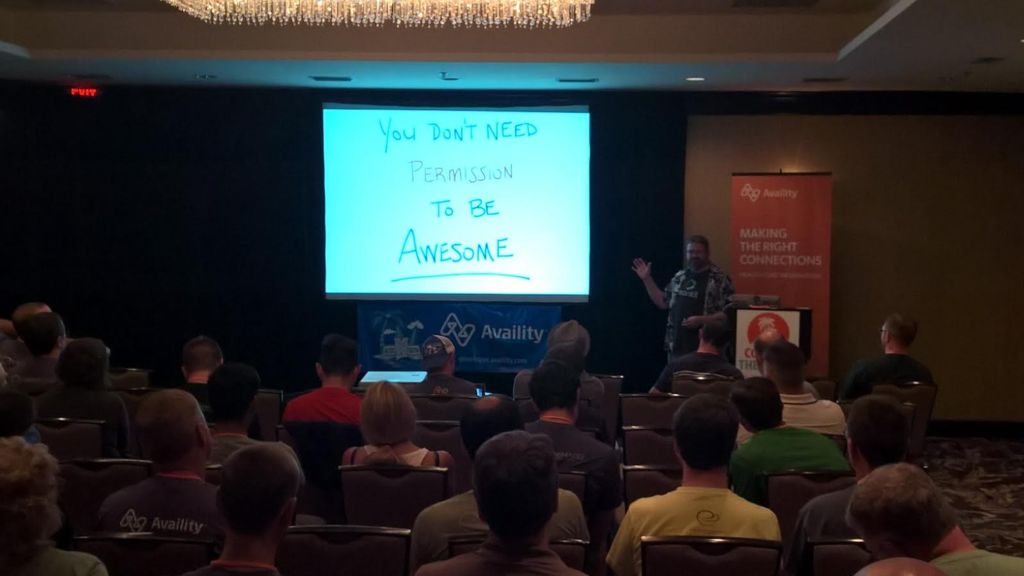 An introducton to Node.js, including use cases for why, and examples of companies using it. The session was so popular we had to stand in the back. It was plenty of slides, but David does a neat job on that part, and it also included a decent demo.

Verdict: Recommended if you are new to Node.js, and carrying the .NET toolbox.

"100 million unique users per month on 9 web servers. Did you ever wonder how StackOverflow was built?" YES! We did. And we had the highest expectations for this talk, it was going to be the gem of the conference. Sadly, it disappointed us. Why?

Honestly, this is a decent presentation, and an insight to the organization of the StackOverflow team, but it was not what we expected (or hoped for).

Verdict: If you want a job at StackOverflow?

Stacey continued her energetic tone, getting to show off her IoT toys - Arduino, Raspberry Pi and more. Stacey was clearly on her home field here, and she really enjoyed showing off her gadgets. But all that energy made the talk a bit unfocused, and hurried. It would have been nice if Stacey could lower the pace a bit, and focus on the talk as well as the gadgets.

"Did you ever write code that passed the tests, but you didn't feel good about it?" This is the starting point for Elijahs code smells. This talk takes a look at identifying stinky code, and how to make it better. The session was quality, and the presenter was clear and knowledgeable.

Verdict: Highly recommended for every developer.

"This presentation will introduce concepts in architecture such as immutability, isolation and asynchronous processing utilizing tools such as AKKA.NET", sounds like a lot, and quite early in the presentation we realized that this would be a race against time. There are many concepts both with the actor model and F# that needs explaining, and Riccardo had plenty of demos he wanted to show us. They were suitable and good, and he tried to convince us with plenty of "pay no attention to the syntax", but it was kind of hard to keep up at that speed. Regardless, Riccardo shows great enthusiasm for the topic, and the last demos were especially cool. As he said "You like that, yes? But that was not the grand finale! Wait for the grand finale!". We liked it.

Verdict: Recommended! A bit messy, but you will want to see the grand finale!

"How can you stretch beyond the same 1 year of experience and grow yourself towards a more senior role?" Elijah takes us through a journey of a key note, pinpointing typical stages om a developers career and how one can stretch for the "next level". This is an inspirational talk, especially suited for younger developers, but as his live poll during the talk showed: Most developers have at some point suffered from the "imposter syndrome". Many in the room probably needed to hear that. As in his previous session, Elijah is a joy to listen to.

Verdict: Don't know where you are in your career? Watch this.

The conference is held at the One Ocean Resort and Spa, and we were recommended to stay at the hotel. Let's put it simply: If you are going to Code on the beach, stay at the hotel! It's a very nice hotel on the oceanfront, and you will have time to enjoy the beach during an extended lunch break as well as before and after the program. The rooms are nice, and the staff super friendly. There is a resturant at the hotell, but there is also several other places for food right around the corner.

Walk path from the hotel to the beach:

You may also get a chance to taste some local beer:

If you are traveling from Norway, as we did, there are direct flights from Oslo to Fort Lauderdale and Orlando. And from Copenhagen to Jacksonville. We suggest combining your trip with some vaction and a Florida road trip. Remember not to pack a full suitcase, as you might win something! (like an Xbox)

This was not the biggest conference, and there were a certain amount of introduction level sessions for new languages and frameworks. If you want to get a feel of whats going on, and glance at why you should use GO, Node.Js, Flux, or React, then this is great. If you are a junior developer most of the sessions are spot on. If you need motivation and inspiration there is plenty of it.<br>
As senior developers though, we could have wished for some deeper and more advanced sessions in addition to this. How about a separate track where we could dig even deeper into some of the new stuff?

So, would we go again? Certainly, if we were Florida based. When travelling from abroad it all depends on the speakers and sessions. But, if you get the chance to combine the conference with some days of vacation in the sun, who wouldn't want to go to Florida? Another sunny option is the sister conference - Code on the Sea.

Last, but not least: This conference had the best "guy with the funny laugh"! A quality conference should always have one of them! If you went to this years Code on the beach without understanding what we're talking about, then it's probably you.

Written by Hans Arne and Hallstein. 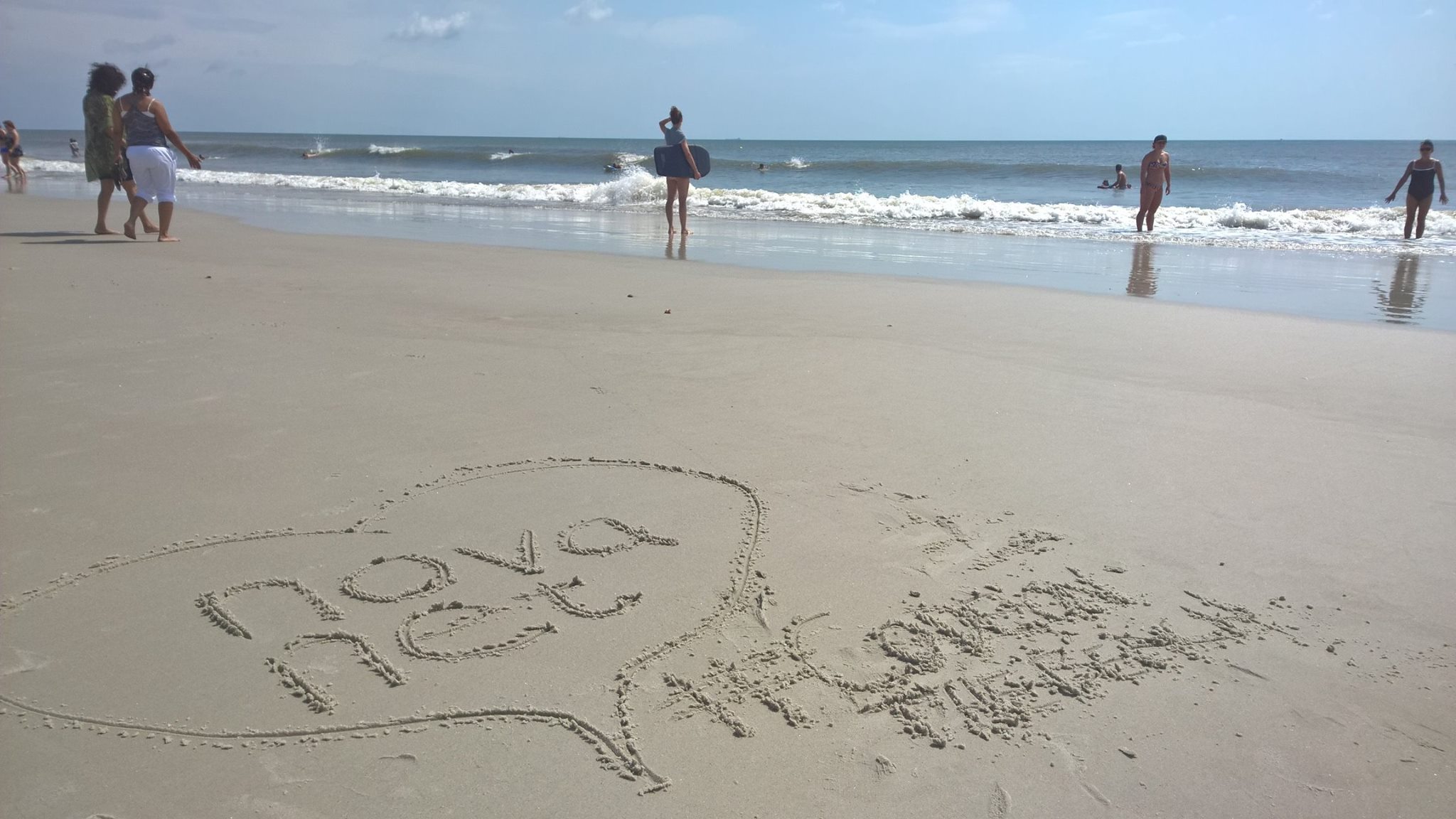 Recently I was working on a Azure Web Job that was reading from an Azure Queue. The requirements of this job was that it should read the queue messages, do some processing and then generate and send an HTML-email based on the incoming message.

One-to-one (or zero) is a common relationship. It's when you want to store some optional information about something, but don't want all the columns in the same table. Still, I often find it unnecessary complicated when using an ORM like NHibernate or Entity Framework.